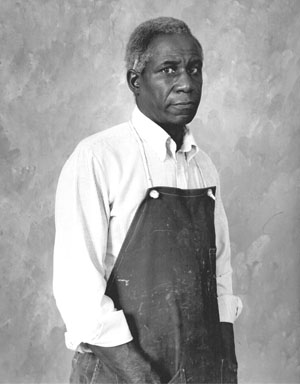 The College Terrace at SUNY New Paltz served as a gathering place for more than 100 guests from around the community and as far as Virginia, who came to remember the life and spirit of Benjamin Wigfall, who passed away earlier this year.

[Use this link to view photos from the memorial]

In addition to his more than 25 years teaching at New Paltz, Wigfall also created Communications Village, an art center in Kingston, N.Y., which served the community as a creative space for children and adults alike, and Watermark Cargo, an art gallery in Kingston where Wigfall curated frequent exhibitions.

As impressive as these achievements are, those who came out on June 10 to pay Wigfall tribute articulated a legacy built more upon his magnanimity of character, his compassionate approach to education, and his wide-ranging contributions to the creative life of the entire Hudson Valley.

Gia Wigfall Oke-Bello, daughter
“As many people know, my dad was very humble, and maybe wouldn’t even have wanted any of this. But we thought it would be becoming, because it’s important for us to celebrate his life, and not just mourn.

“One of the things I remember most about him is that he always asked you to dream a little bit, to think about what you really want to do. He never seemed to put barriers in your mind at all about anything you desired.”

Peter Oke-Bello, son-in-law
“The person we remember today, Benjamin Wigfall, lived to be about 85 years old, and he touched a whole lot of people’s lives. It’s not so much about how many years you live on earth, but what impact you made in the lives of others – your generation, you community, your family, your nation as a whole. That’s why we see so many coming from far and wide to honor Benjamin Wigfall.”

Maurice Brown, retired faculty colleague and friend
“An artist needs a sense of history; artist needs discipline; and an artist needs a love of his medium. But the ultimate need is to be alive at the moment, in every moment. Ben was an exemplar of this if I ever saw one. He didn’t miss anything. For him, everything mattered, and that was his statement as an artist: either nothing is trivial or everything is trivial, nothing is profound or everything is profound. I love him for that. He will be an indelible part of me and my outlook for the rest of my life.”

A.J. Williams Myers, retired professor of Black Studies
“When I read about Ben’s involvement as a student in the South, during the civil rights movement, I felt he brought that spark with him to the Hudson Valley, to the Strand, to Communications Village. He gave expression to it in his art; it was felt in his voice. He was a quiet type, but he spoke with a voice that was powerful. His art was a means by which to give voice to who we are.”

Lance Seunarine, a student of Wigfall who later became his colleague in the faculty.
“Ben Wigfall was a surrogate father for many of us on the New Paltz campus at that time. He was present at all the Black Student Union meetings, and was there when we negotiated with the administration to create the Black Studies Department. On weekends he would find time to interview students for what would eventually become the EOP program, and when we had Family Day, you can bet your last dollar Ben would be there with his recorder, taping everything for our history and our posterity.”

Dina Washington, a family friend who spent childhood years at Communication Village
“Communications Village is where I first came in contact with this extremely brilliant, creative, kind, and humble visionary. I am truly blessed to have had the influence of this remarkable man in my life. His influence contributed to my ability to persevere during rough patches in my life, and continue steadfastly in a positive direction. He believed in me when I didn’t believe in myself.”

Joe Ramos, faculty colleague in printmaking
“I respected Ben. He was a great artist and a great teacher, and he always spoke the truth to me, even if I didn’t like it. When he retired I missed him, but then he went on to open up Watermark Cargo Gallery. There I think was when he was really the happiest. He was able to bring those skills he had curating, talking about people’s art and mounting shows, and he seemed really content.

Thomas Sarrantonio, student, friend, associate professor of art
“I had the privilege of showing at Watermark Cargo Gallery, and experiencing Ben’s great generosity. He would come to my studio and pick out paintings. He would surprise me with how he would hang the paintings in ways I never would have thought of, but it was always beautiful, and I was always thrilled with his care in putting on a show, and his great eye in seeing things in my work that I hadn’t seen myself.

Anthony Faiola, former student, now head of biomedical & health information services at the University of Illinois at Chicago
“In all the time I was around Ben, almost every day for three years, I recall nothing more than a very deep impression of his gracious way of mentoring, and most of all, the way he cared about me as both a person and a student. In my view, although words may capture the precision of one’s thoughts, it is those less tangible feelings that embody the spirit and soul of a person. This is what I treasure about the memory of Ben Wigfall.”

Patty Tyrol, former student
“Ben was so devoted to us in the printmaking studio that he never left on the days he taught. He just got so entangled in everyone’s projects, talking to each of us at length, convincing or pushing us to try something new, then staying to see it through. We were so lucky to have him, and we knew it.”