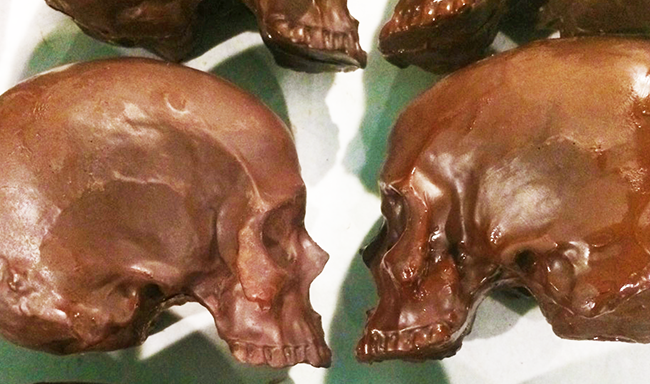 Lagusta’s Luscious, a vegan chocolate shop based in downtown New Paltz, partnered with the Hudson Valley Advanced Manufacturing Center (HVAMC) at SUNY New Paltz to create hundreds of chocolate skulls for the wrap party of the television series Bones.

Lagusta Yearwood, owner and chocolatier at Lagusta’s Luscious, is friends with Bones star Emily Deschanel, who has long been a patron of Yearwood’s vegan sweets. Deschanel first brought up the idea to treat the show’s cast and crew to chocolate skulls, Yearwood looked at a number of possible ways of filling the order before eventually landing on the College’s 3D printing lab.

“We looked around for a long time at readymade, not custom, skull molds, but we didn’t find any that weren’t cartoonish that were the right size we needed,” Yearwood said. “We all wanted a super lifelike skull that was very detailed and almost human-sized.”

Yearwood eventually connected with Kat Wilson ’14g (Metal), HVAMC assistant director, and together they made a plan to design a lifelike skull mold that could be used to craft the candies.

To make sure the finished product was as lifelike as possible, Wilson borrowed a replica human skull from the Anthropology Department on campus. She scanned it and printed a replica using the lab’s Stratasys Connex 2 printer, and that replica was then used to create a mold in food-safe silicone. 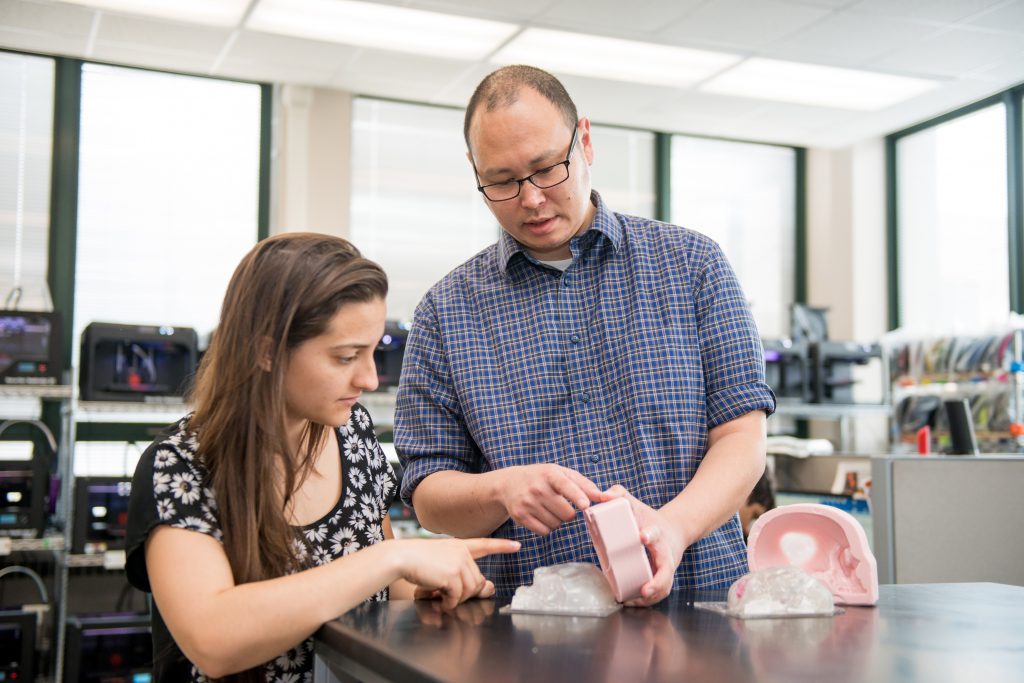 “I hadn’t worked with 3D printing before, but it was a great process – they were so good at their jobs and easy to work with. It was a real pleasure,” Yearwood said. “It also gave us lots of good ideas for future projects. It’s amazing to know that if a customer comes to us with a custom chocolate request we have this great resource in our backyard we can turn to.

“The chocolate world is super dependent on molds, and as a chocolatier I see the same shapes over and over in other chocolate shops—everyone uses the same molds. It’s really exciting to know that we can make molds of whatever we want, and do things that are unique.”

Once the mold was in place, the team at Lagusta’s Luscious got down to making 260 individual skulls – casting the mold in chocolate, filling it with bonbons, sealing it with chocolate glue and dipping and re-dipping each skull, by hand, to give it a delicious outer coat.

“They turned out great!” Yearwood said. “Emily and the whole crew were really happy with the look, and we heard that they tasted great too, which is the most important.”

Lagusta’s Luscious is open at 25 North Front St. in New Paltz, and their chocolates can be found at Lagusta’s Commissary Café on 11 Church St., too.

Learn more about the HVAMC’s many partnerships with local businesses at their website.