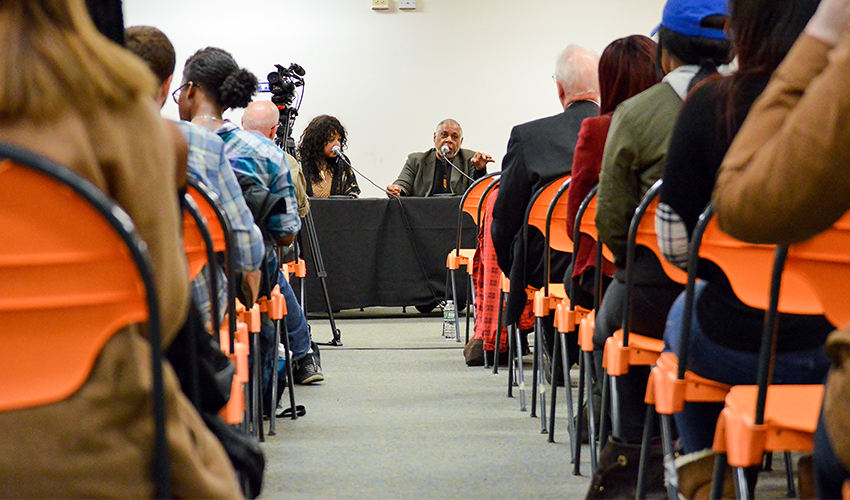 SUNY New Paltz alumni Cheryl and Abdullah Rahaman visited campus on Feb. 23 to share the story of the late 1960s-founding of the student group Blacks for Black Liberation, the precursor to the College’s Black Student Union.

Cheryl and Abdullah were civil rights activists at New Paltz during a time when national tumult around race relations could be felt in the Village and on campus. They spoke with an audience of nearly 100 students, faculty and staff about their experiences on campus between 1965 and 1969.

During those years at SUNY New Paltz, societal changes combined with actions taken by the forward-looking administration of then-President John J. Neumaier, which championed policies such as Project A (later known as the Educational Opportunity Program), to create an exponential increase in enrollment of Black students.

“Students were coming in from African-American households and also from Africa,” said Interim Vice President for Student Affairs W. Wayne Brumfield. “Throughout that time period the campus went through some significant cultural changes.”

Many of these students, the Rahamans included, saw a need to organize and self-advocate. It was from this energy that the Blacks for Black Liberation group was born.

“It was that part of society that said, ‘This is wrong, and this is right,’ that allowed us to pull our forces together and start Blacks for Black Liberation,” Abdullah said. “There were a lot of multicultural people who got behind us, and to this day many of them are our close friends.”

Both Abdullah and Cheryl complimented the current members of the Black Student Union for carrying on that energy, and continuing to make progressive contributions to the cultural and academic climate of the College. They urged them never to relent in their efforts.

“The beliefs that you carry with you are yours, and you have to support them,” Abdullah said. “We suffered the slings and arrows of integration, worked very hard to make sure that our activism was not misunderstood. We couldn’t compromise then, and I admonish you that you shouldn’t compromise now.”

Visit the Black Student Union on Facebook to learn more.