The Department of Theatre Arts at SUNY New Paltz presents a staging of Caryl Churchill’s thrilling Mad Forest, a gripping account of the Romanian Revolution told through a dramatic fusion of reality 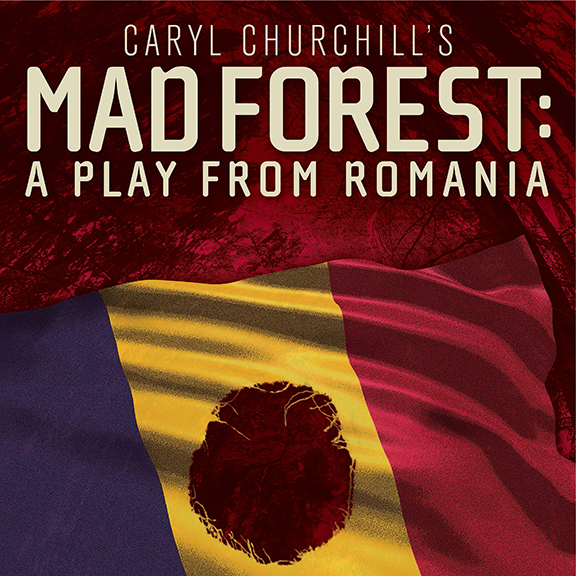 The production is directed by Assistant Professor Catherine Doherty and performed by an ensemble cast of 14 New Paltz student actors.

Mad Forest moves cinematically between scenes set before, during and after the Romanian Revolution of 1989, an extended period of violent unrest that brought about the eventual end of 42 years of Communist rule in Romania.

Churchill’s tale is told from multiple perspectives: citizens young and old, wealthy and working-class, Romanian and Hungarian, animal, spiritual, and even soulless are given space to voice their thoughts, fears and conditions.

The narrative centers on two families plunged into political and social turmoil, whose members struggle to remain functional in a state of surveillance where public spaces are often bugged and private moments never fly beneath Big Brother’s radar.

Mad Forest also surprises with ventures into surreality, as characters find themselves conversing with ghosts, animals and vampires, and the drama rises in a mesmerizing nightmare sequence.

Through its mixture of conventional storytelling and magical realism, Mad Forest examines the complex oppression of individuals and families who bore witness to and participated in one of 20th century Europe’s most unsettling civic upheavals.

Tickets can be purchased online by following this link or in person at the Box Office in Parker Theatre, open Monday – Friday from 11:30 a.m. – 4:30 p.m.

About the Director
A member of the SUNY New Paltz Theatre Arts faculty in both performance and design, Catherine Doherty is also the associate artistic director of Potsdam Music Theatre in Potsdam N.Y. An award-winning director and actor, Doherty’s directing credits include productions such as The Elephant Man, M. Butterfly, Doubt, Chicago and A Chorus Line. As an actor, she has appeared as Nurse in Romeo & Juliet, Lady Bracknell in The Importance of Being Earnest, the Wicked Witch of the West in The Wizard of Oz and Margy in Good People. Doherty has worked in various capacities with Opera North, The John F. Kennedy Center for the Performing Arts, Charter Oak Regional Theatre, Papermill Playhouse in New Jersey and Theatre in the Square. She has worked for ABC, CBS and Fox Television, and is a Telly Award-winning filmmaker. Her short film Family Portrait received the prestigious Ida Lupino Award from the Directors Guild. Doherty holds MFA degrees in Performance from The University of Georgia and Film Direction from The American Film Institute.