The University & College Designers Association (UCDA), a collective of design professionals from more than 1000 member colleges and universities, has announced the winners of its 46th Annual Design Competition, a national contest that honors the very best in design work promoting educational institutions.

SUNY New Paltz has been recognized with 2016 UCDA Awards for Excellence in three communications categories:

“For designers around the world, submitting to the UCDA Design Competition is an opportunity to gain notable recognition for their work in a highly competitive, professional and visible way,” said Senior Designer Jeff Lesperance, who provided art direction for the Admission Campaign and Viewbook. “SUNY New Paltz is proud to be recognized among the winners of this prestigious event.”

The judges of this year’s UCDA Design Competition evaluated nearly 1,100 entries from national and international institutions. New Paltz won three of only 210 awards that were distributed. 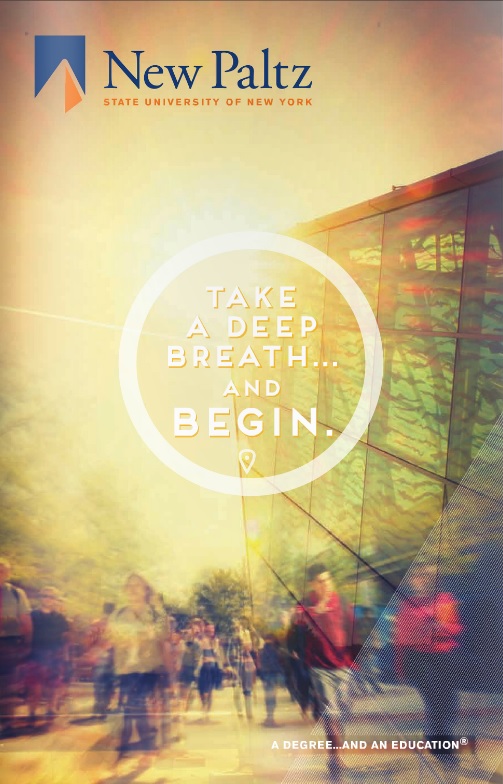 The College’s 2015/2016 Admission Campaign and Viewbook were developed by a collaborative team consisting of members of the Office of Communication & Marketing and the Office of Undergraduate Admission, as well as numerous New Paltz students and faculty who contributed their time, energy, and ideas to the project.

The Viewbook was one aspect of the larger campaign, a richly designed publication that was first delivered to prospective students considering enrollment in the fall 2016 semester.

The award-winning exhibition catalog for Andrew Lyght – Full Circle, which was on view at the Dorsky during the spring 2016 semester, was led by Designer Carmen Calderon and Editor Lou Roper, a professor in the Department of History. It features art from the exhibition and a number of critical essays, including one by Sara Pasti, the Neil Trager Director of the Dorksy Museum.

The UCDA will officially present awards and exhibit the work of winners at the upcoming UCDA Design Conference, to be held from Sept. 24-27 in San Antonio, Texas.

More information about the UCDA can be found on their website.