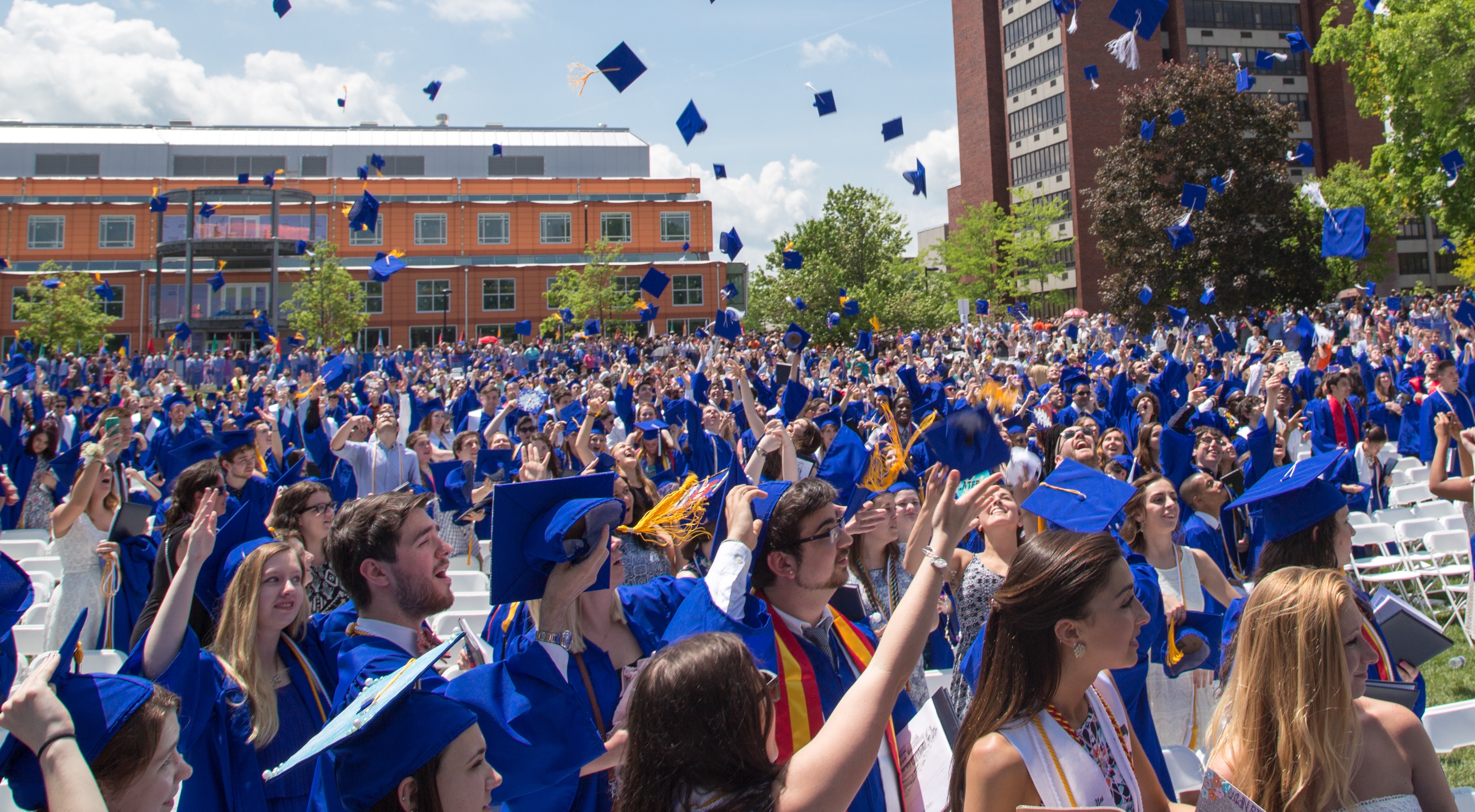 SUNY New Paltz will hold the 2016 Undergraduate Commencement Ceremony beginning at 10 a.m. on Sunday, May 15, on the Old Main Quadrangle on the New Paltz campus. The Graduate Ceremony will be held on Friday, May 13, at 6 p.m. in the Athletic and Wellness Center.

This year, there are 1,870 undergraduate and 522 graduate degrees being conferred. The ceremonies will recognize two cohorts of students: August and December 2015 graduates and May and August 2016 candidates. SUNY New Paltz President Donald P. Christian will preside over the ceremonies. All members of the campus community are invited and encouraged to attend.

Undergraduate Commencement Speaker
At the Undergraduate Ceremony, Regina Calcaterra ’88 (Political Science), an attorney, advocate and best-selling author of the memoir “Etched in Sand,” will deliver the address.

Calcaterra has participated in numerous college events, most recently as Distinguished Speaker (Spring 2015) and as a panelist for a Women’s Summit in April 2015. She joined the SUNY New Paltz Foundation Board in January of this year.

Her memoir, about how she and her siblings survived growing up homeless on Long Island, rose to #2 on The New York Times Best Sellers list and remained on the list for 17 weeks. As a result of its messages of resiliency and optimism, it has been integrated into middle, high school and college curricula throughout the United States. Her second non-fiction book, “Girl Unbroken,” will be published by HarperCollins Publishing in October 2016.

Education has always played an important role in Calcaterra’s life. As a child in and out of foster care, she was often told that the only way out of her situation was to be part of the less than two percent of foster care children who graduate from college. Because of this, she enrolled at SUNY New Paltz where a class on International Politics taught by Professor Lew Brownstein (now retired) inspired her to seek a career in public policy and the law.

Calcaterra presently works as counsel for a private law firm. During her 28-year career, Calcaterra has not lost sight of the importance of reaching out to young people in need – especially those deprived of stable homes and families. She proudly serves as board member of You Gotta Believe, a not-for-profit organization whose mission is to find permanent parents and families for young adults, teens and pre-teens adrift in the foster care system.

Valedictorian
Margaret Hack ’15 (English), of New Windsor, N.Y., has been named valedictorian. As the top student in her class, Hack will address her fellow candidates for graduation at the Undergraduate Commencement Ceremony.

“It’s exciting to be speaking at the Commencement ceremony,” Hack said. “I’ve had wonderful experiences in and out of the classroom at New Paltz, and it’s important to take a moment to reflect on that before moving on. For me and all the other graduates, everything we’ve been working for comes to fruition at graduation.”

As an English major, Hack has used her writing as a tool for intellectual stimulation and professional development throughout her career at New Paltz. She said one of the most important experiences she enjoyed during her time here was a for-credit publishing industry internship at Valley Table magazine, which has given her a sense of direction as she considers possible career paths.

“I was an editorial intern and was able to write a lot, which is something I’d like to focus on after graduation,” she said. “It was great to know that the College supports these kinds of student internships.”

Salutatorian
For this year’s salutatorian Jacob Zyskowski ’15 (Business Administration), of Altamont, N.Y., the support system of the Honors program, relationships with faculty, good friends and his involvement in many co-curricular activities have been highlights of his New Paltz career.

Zyskowski is a member of the Management Association, the Catholic Campus Ministry, Students for Sustainable Agriculture, and he volunteers in the campus greenhouse.

“The extra, non-academic side of things at college really helps you grow personally and professionally, in ways that classes aren’t always able to,” Zyskowski said.

He will graduate with the Class of 2016 at the Commencement Ceremony, but will remain at the College through the end of the year to complete the School of Business’s 4 + 1 Program, which lets students earn both a bachelor’s and master’s degree in just five years. He said the program has him feeling optimistic about future career prospects, thanks in part to the professional networks the Business faculty have welcomed him into.

Halpern, who is retiring after 43 years at the College, has been in a leadership role while responding to local and national disasters, including 9/11, Hurricane Katrina and other hurricanes, the crash of Flight 587, the Newtown school shooting, and the Harlem building explosion. He is the first author of the best selling textbook in the field, “Disaster Mental Health: Theory and Practice,” and of a new Office of Mental Health training curriculum, Fundamentals of Disaster Mental Health Practice. He is regularly called on locally, nationally and internationally to provide training, workshops and media commentary on the mental health aspects of disaster. Halpern is a member of many advisory boards and emergency response committees including the New York New Jersey Planning and Emergency Preparedness Learning Center, the World Association for Disaster Emergency Medicine and the New York State Veterans Mental Health Training Initiative, and he is an instructor and responder for the local, regional and national Red Cross.

Webcasting
SUNY New Paltz’s Commencement ceremonies will be webcast over the Internet. To access the webcasts visit http://totalwebcasting.com/live/newpaltz.