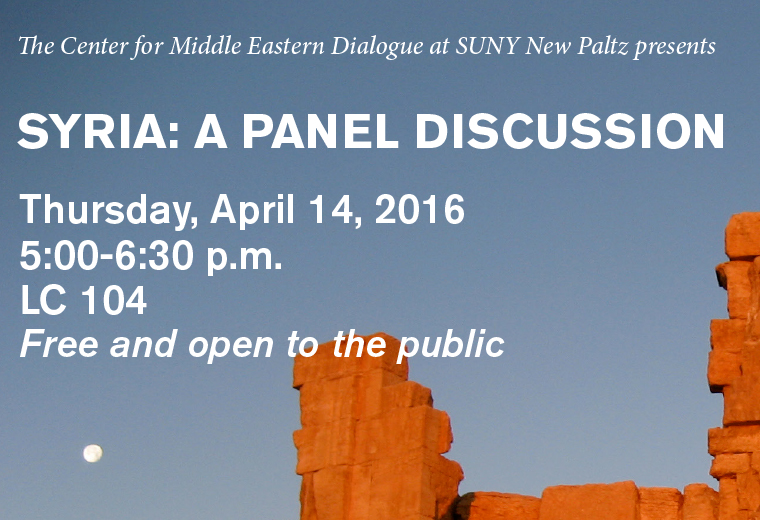 The Center for Middle Eastern Dialogue at SUNY New Paltz will present “Syria: A Panel Discussion” on Thursday, April 14, at 5 p.m. in Lecture Center Room 104.

“Syria: a Panel Discussion” is supported by the Office of Academic Affairs, the Lifetime Learning Institute, the College of Liberal Arts and Sciences, the Department of Philosophy and the Department of Political Science and International Relations. The event is free and open to the public.

We are able to offer accommodations to enable hearing impaired individuals to attend and enjoy this event. If you require such accommodations, or for more information about this event, please contact Professor James Schiffer at schiffej@newpaltz.edu. Note that requests for accommodations must be received at least three business days prior to the event in order to be filled.

About the Center for Middle Eastern Dialogue
The Center for Middle Eastern Dialogue at SUNY New Paltz was founded in 2008. Its purpose is to promote constructive dialogue about the Middle East that will explore ways to establish lasting peace in the region, encourage economic collaboration, and stimulate cultural and educational exchange. The Center provides a forum for students, faculty, community members, scholars, and diplomats of various points of view to exchange ideas in a respectful way that will promote greater understanding of this complex and volatile region of the world.  This forum will demonstrate the possibility and value of meaningful dialogue between people of goodwill, even between those who disagree on fundamental issues.