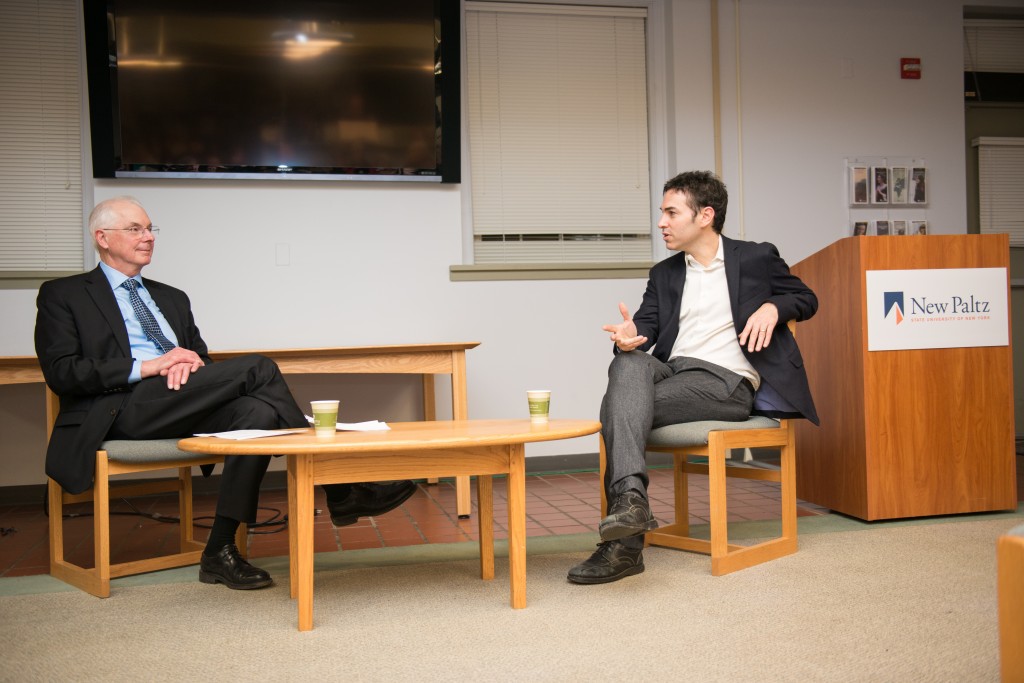 Press took questions from President Christian and from the students and faculty in attendance, and the result was a rich and thoughtful conversation about the power and responsibility of journalists, the possibility of their objectivity and the importance of seeking humanity while reporting on contentious subject matter.

Press, who is teaching an upper-level journalism seminar this semester called “Reporting on Divisive Subjects” and who has spent much of his career as a journalist reporting on abortion in America and on the Israeli-Palestine conflict in the Middle East, used the Q & A format to share his experiences battling his own biases, and his thoughts on why he thinks doing so is a journalistic necessity.

“Both as a writer trying to understanding things and at a moral level apart from my writing, I feel an obligation to try to understand the way that people who don’t agree with me think about these divisive issues,” Press said. “If you don’t think about the other side’s story, it can lead very quickly to dehumanizing them and even to excusing or justifying violence against them. So I’ve come to feel that it would be reckless and a disservice to my readers if I didn’t think about, know and learn the narratives on all sides of an issue.”

Students in the audience later asked Press to discuss more general ideas about the profession of journalism. His response demonstrated a close, personal familiarity with the extreme highs and lows that often comprise the reporter’s career.

“One of the things I think is true not just for me, but for a lot of people who want to become writers and go into some form of reporting or creative work, is that the mentors you have are often your peers,” Press said. “You have a lot of bruising experiences as a journalist: disappointment at things you thought would happen that didn’t, pieces you pitched that didn’t get accepted. You have to have a support network, and I’ve found the people who’ve helped me get through these difficult times are usually the people who can say, ‘Don’t worry, it’s happened to me also.’”

Eyal Press is the author of Beautiful Souls: Saying No, Breaking Ranks, and Heeding the Voice of Conscience in Dark Times, a book of narrative journalism that considers the choices and dilemmas faced by those who reject duty and the expectations of others in order to remain true to their principles. His previous book, Absolute Convictions, is a personal account of conflicts between abortion providers, protesters and politicians. More information about these publications can be found on his website.

Faculty interested in inviting Press to speak at a class or other campus event or gathering may place a request with Lisa Phillips at phillipl@newpaltz.edu.

“The Ottaway is the only endowed professorship at SUNY New Paltz, and it would not exist without the vision and generosity of Jim and Mary Ottaway,” said Lisa Phillips, assistant professor of journalism and Ottaway coordinator. “Because of the Ottaway program we’ve been fortunate to have several prestigious journalists spend a semester teaching in our department. They are among the most awarded and celebrated reporters working today: journalists whose work has made an indelible mark on the profession.”