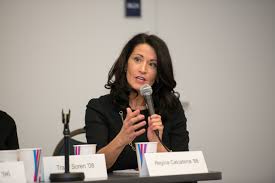 “When I was asked to serve, I did not hesitate in saying yes,” said Calcaterra. “This is a way to come back to a community that significantly impacted the direction of my life.”

Calcaterra’s ties to the College have not wavered in recent years. She has been on campus to participate in numerous events, including as Distinguished Speaker and as a panelist in the first Women’s Summit in April 2015.

“Participating in events provides me a chance to learn how much New Paltz has grown and to experience the first-class education that students are now receiving,” said Calcaterra. “I consistently leave every event or gathering with an increased sense of alumni pride.”

Education has always played an important role in Calcaterra’s life. As a child in and out of foster care, she was often told that the only way out of her situation was to be part of the less than two percent of foster care children who graduate from college. Because of this, she enrolled at SUNY New Paltz where a class on International Politics taught by Professor Lew Brownstein inspired her to seek a career in law. Calcaterra currently works as deputy general counsel at New York State Insurance Fund where she provides advice and counsel on special projects.

“Professor Brownstein opened my mind liked no other professor before him. Although his class was one of the hardest I ever took I truly learned the most. It was where I found my passion,” said Calcaterra. “The education I received from New Paltz gave me direction and led me to my career in public policy, politics and the law.”

Calcaterra’s life trajectory, and childhood entrenched in the foster care system, are featured in her memoir “Etched in Sand,” which rose to No. 2 on The New York Times Best Seller list upon its 2013 publication. The book has since been added to middle school, high school and college course curricula across the nation. Her next book will be published in October 2016,

During her 26-year career Calcaterra has not lost sight of the importance of reaching out to young people in need — especially those deprived of stable homes and families. She proudly serves as board member of You Gotta Believe, a not-for-profit organization whose mission is to find permanent parents and families for young adults, teens and pre-teens adrift in the foster care system.

“Serving as board member to an organization that was solely committed to finding forever homes for older youth in foster care is a way I have been able to prevent other teens in foster care from facing the same obstacles I did,” she said.

Learn more about Regina Calcaterra and You Gotta Believe online.