Ex Machina, the first film screened in this year’s “Without Limits: Interdisciplinary Conversations in the Liberal Arts” series, answers the question of what can happen when computer programmers lack sufficient training in the methods of critical inquiry central to the study of the humanities and social sciences. 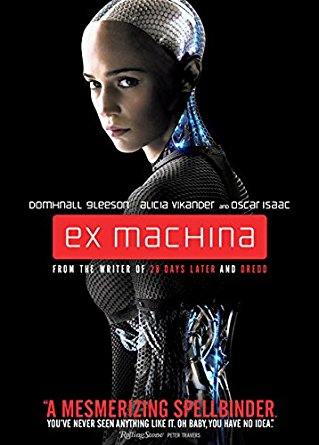 The Nov. 13 screening offered a suspenseful and entertaining introduction to this year’s series theme “March of the Machines: Artificial Intelligence, Interactivity and Automation in the Digital Age.”

Jed Mayer, an associate professor of English, facilitated the discussion of the film, which features a beautiful and surprisingly human android named Ava.

Ava is subjected to the Turing Test for artificial intelligence by her creator, Nathan, and programmer Caleb. Caleb is taken, under false pretenses, to the isolated compound where Ava is held and quickly falls in love with her.

In the end, Ava turns the tables on her captors and stages an escape after killing Nathan and sealing Caleb inside the compound.

Mayer asked the audience, which included faculty, community members and students, to consider the ways in which Ava is objectified and cruelly treated by her male captors and to ponder whether the film’s violence serves a meaningful purpose.

In the film’s approach to defining what it means to be human, Mayer found echoes in the use of animals for scientific experiments, victims of the Third Reich and asylum seekers in the U.S.

“Marking someone as other is a privilege accorded to those in power, and it has been used for centuries, often with the support of philosophers who deem this or that quality to be uniquely human, and hence exclusive to a privileged class,” Mayer said.

In the film, Ava’s otherness justifies her treatment as a slave, and her final triumph represented, for Mayer, “a powerfully feminist statement on the sexist assumptions that shape the paths taken by artificial intelligence development.”

In the spring, Without Limits programming will continue to draw on the themes of AI, interactivity and automation with a diverse lineup of programming.

For more information on Without Limits, visit the series website.