This fall, Mary Holland sought to make visible how prevalent and diverse experiences of sexual assault are in our society. In translating the viral #MeToo movement into a campus visual-awareness installation, Holland, a professor of English, offered an unexpected, yet powerful medium:  Post-it notes.

The installation, “#MeToo:  Facing the Pain and Prevalence of Sexual Assault” was displayed in the Student Union second floor lobby on windows overlooking HAB from November 1-9.  Signs posted on individual window panes helped to define the installation’s three-part structure, which invited campus community members to describe what sexual assault looks like, how it affects victims, and to offer support for victims and suggestions for societal change. 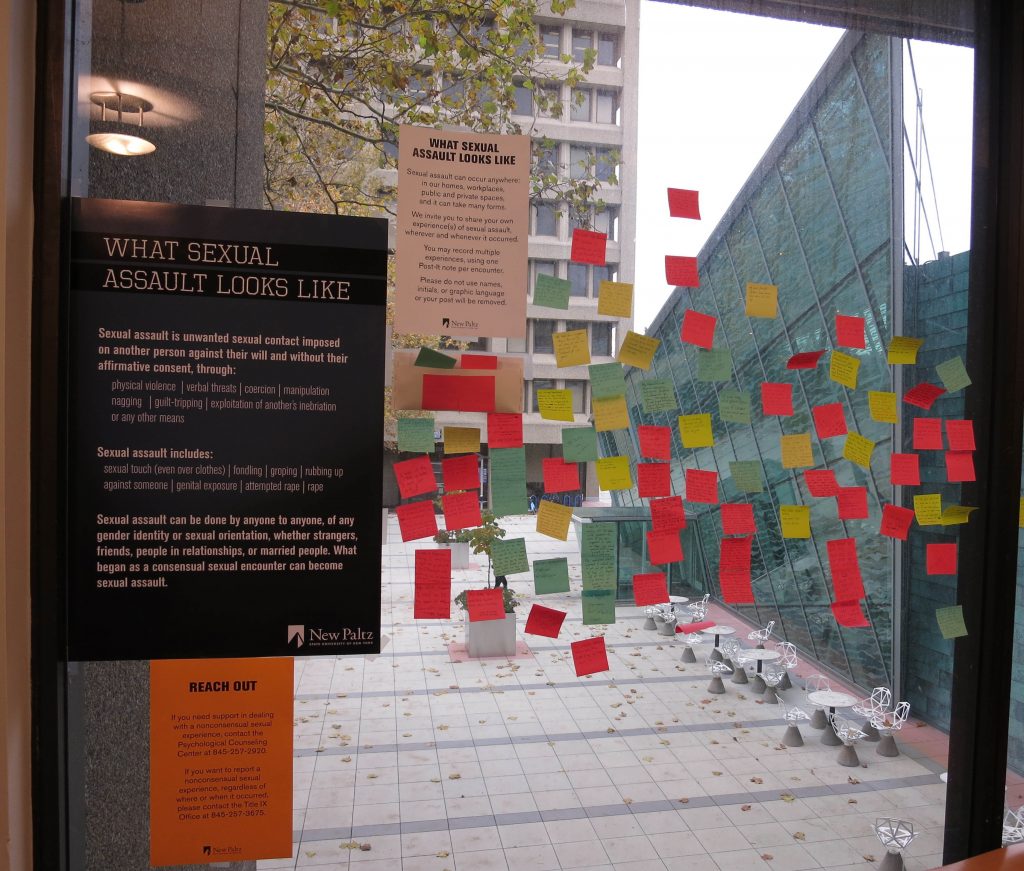 On the brightly colored Post-its, participants described a range of experiences, from child molestation to date rape, groping and cat calls, and a variety of perpetrators:  a sister, next door neighbor, teacher, employer, family friend, boyfriend.

The lasting trauma of sexual assault was evidenced by references to attempted suicide, struggles with intimacy and persistent feelings of shame. “I can’t get close to anyone,” one began. “I’m always so empty, and I’ve so few memories from childhood because of what happened. I feel like I’m permanently damaged.”

“I am redefining the word family and creating a new ‘normal’ lifestyle,” wrote another.

Morcone said she wanted the installation to be a “place of healing” for victims who often bear their suffering in silence for personal or professional reasons. One message on the final pane offered a simple recognition:  “I believe you.”

Holland described her intention as twofold:  “I wanted people who experienced [sexual assault] to be able to express it, and I wanted people even if they haven’t experienced it, to have to say ‘Oh my God, this happens to people’ and feel that. We’re never going to get out of a culture that cultivates assault until the real experiences of it can be felt by everybody.”

For Holland, that includes men in particular.  Though Holland received an outpouring of support for the installation from members of the campus community, only two men (both friends) made a point of speaking to her about it. Holland saw this as evidence of the misconception that sexual assault is a “woman’s problem,” despite the fact that men are most commonly the perpetrators of sexual violence.

“If we can’t get men to participate in acknowledging this and acknowledging their part in the culture that normalizes it, it’s never going to change. And that hasn’t happened yet,” said Holland.

Holland, whose teaching interests include contemporary American and British literature and theory, utilizes her platform as an educator to teach students about power inequalities and sexual assault. This fall, she connected her discussion of Joyce Carol Oates’ haunting 1966 short story “Where Are You Going, Where Have You Been?” and its portrayal of the sexual coercion of a teen by an older man to the larger cultural discussion about sexual assault and power differentials between men and women. She live-streamed the testimony of Christine Blasey Ford during Brett Kavanaugh’s Supreme Court nomination hearings and asked for her students’ input on the “MeToo” installation.

“As humanities teachers, we see it as our job to educate our students about these forms of prejudice and coercion and power, but how often do we talk about sexual assault that way? It’s the same thing. So we need to incorporate it into all the ways we educate people. That’s what we do here after all,” she said.

Holland and colleagues Morcone, Andrea Varga and Robin Cohen-La Valle will host a roundtable on sexual assault and ways to address it on campus during a SUNY-wide conference in April.

Sojourner Truth Library will preserve the “#MeToo:  Facing the Pain and Prevalence of Sexual Assault” installation in its special collections.