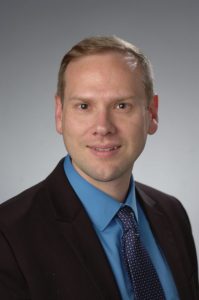 Dr. Jonathan Preston, CC-SLP, an esteemed expert in child speech sound disorders, will be the presenter at the Speech & Hearing Association of the Hudson Valley (SHAHV) Fall 2019 Conference on October 5, 2019. The Communication Disorders Dept. is proud to sponsor this all-day event which will take place on campus in the Lecture Center, Room 102. To register, visit SHAHV.org. SLP professionals may earn .06 CEUs for their attendance.

Dr. Preston has been working with children with speech sound disorders for 15 years. He received his PhD from Syracuse University in 2008 and completed postdoctoral training at Haskins Laboratories, an affiliate of Yale University. He is an Associate Professor in the Communication Sciences and Disorders Department at Syracuse University. He is currently involved in multiple federally funded clinical trials to study treatments and different service delivery models for school-age children with persisting speech sound errors as well as Childhood Apraxia of Speech.

The workshop will focus primarily on evidence-based treatment considerations for school-age children with speech sound disorders. The emphasis will be on treatment of persisting articulation errors. Recent approaches that formalize principles of motor learning will be highlighted, including speech motor chaining, concurrent treatment, and challenge point. Specific cueing strategies for late-developing (and hard-to-treat) sounds will be offered, including scientifically-informed cueing strategies for /r/ and /s/. Other treatment factors such as speech perception training and methods to visualize speech will also be described. 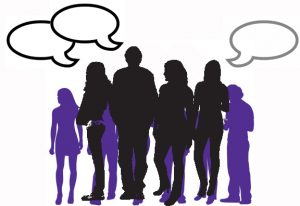 The Speech, Language and Hearing Center at SUNY New Paltz is offering a spring semester clinic for adolescents who need assistance with social skills. This group is for middle school/high school students. (Preferably 7th -11th graders).

This specialty clinic will be conducted on Thursdays from 5:00-6:15 pm and will focus on improving verbal and non-verbal communication skills in a variety of social interactions. Therapy will be conducted in a group setting by undergraduate students in the Communication Disorders program, supervised by Wendy Bower, Ph.D. CCC-SLP—a New York State licensed and certified speech language pathologist and full-time faculty member. Large and small group interventions will include activities to enhance social communication and there will be a maximum of 8-10 students in the group.

The session will run for 10 weeks beginning February 9, 2017. There is no clinic on Thursday March 23 and Thursday April 13 during Spring Break. The fee for the clinic is $100 for the 10 week session.

The group will meet at the Speech, Language and Hearing Center which is temporarily located in the South Classroom Building (SCB) on the SUNY New Paltz campus. For further information or to sign up for the group, please contact Kelly Colby, the secretary in the Department office, at 257-3600, or e-mail Dr. Bower at bowerw@newpaltz.edu. 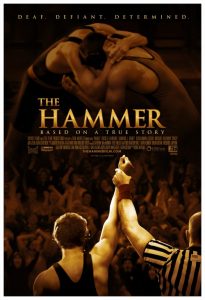 The SUNY New Paltz American Sign Language (ASL) Club held it’s second movie night of the semester on December 3, 2016. The movie shown was “The Hammer” – the biographical film of Matt Hamill, the first Deaf wrestler to win a National Collegiate Wrestling Championship. ASL Club movie night audiences tend to be students fascinated by Deaf culture and American sign language, with occasional attendance from members of the Deaf community. For the movie night events, the ASL Club selects movies where the protagonist is a Deaf individual. This is done not only to show Deaf individuals’ use of sign language but also to demonstrate what Deaf life is like, and what better way than to do so from the perspective of a Deaf protagonist?

The ASL club has also shown “The Miracle Worker” – the classic story of Helen Keller and Anne Sullivan. These two movies portray the frustration, struggles, and great achievements of two vastly different Deaf individuals. I can confidently say that following the movie showing, attendees leave with a greater appreciation and better understanding of the Deaf community.

On behalf of the ASL Club, we would like to again thank everyone who has attended a movie night event. We intend to do more events like these in the future and look forward to having more students and other members of the campus community and wider community in attendance. We hope everyone will enjoy themselves and learn something new! Also, a special thank you to our supervisor, Rebecca Swenson, and the staff of the Communication Disorders Department and Deaf Studies Department for spreading the word about movie night. Until next time!  -Jillian Quirante, Public Relations, SUNY New Paltz ASL Club 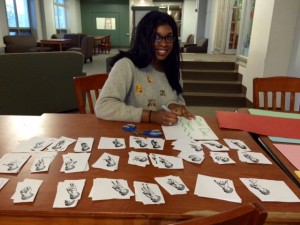 Thursday evening, March 31, 2016, in Bouton Hall, I collaborated with Resident Advisor Esoshani Barton to put on an American Sign Language (ASL) Social Program for the dormitory residents as part of the Residence Life Community Outreach Initiative. Esoshani is a senior majoring in International Relations and minoring in Deaf Studies. She has taken numerous courses in the Deaf Studies minor and is currently working on an independent studies course to advance her knowledge of ASL and Deaf Culture.

For the program, we instructed a beginning sign language lesson including ASL fingerspelled alphabet, numbers, Wh- question signs, food, family and feeling signs. Then we conducted activities such as ASL bingo and ASL charades. Participants had the opportunity to make ASL door decorations with the handshapes for the fingerspelled names. 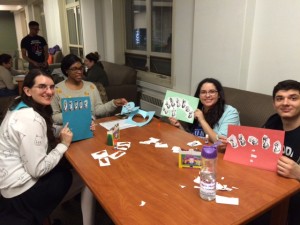 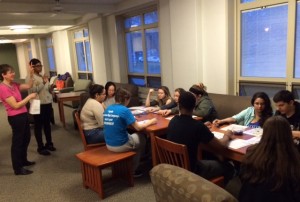 This event was enjoyed by all attendees! It was wonderful to be involved in this Residence Life program that shared American Sign Language and Deaf Awareness with the dormitory community.

On Tuesday, May 12, 24 juniors and seniors majoring in communication-related fields were inducted into the Lambda Pi Eta National Honor Society at a ceremony in the College Terrace.  While the national Lambda Pi Eta criteria are a 3.0 overall GPA and a 3.25 major GPA, The SUNY New Paltz Chapter requires higher standards of an overall 3.25 GPA and a 3.5 major GPA, as well as junior or senior standing in a communication-related field. The Department of Communication Disorders is pleased to announce ASL Movie Night on Tuesday, April 28, 2015. “The Legend of the Mountain Man” (rated PG) will be shown at 6:30pm on campus in Lecture Center Room 100. There is no cost for this event. The movie is presented in sign language and is closed captioned for the hearing.

Please join us for this ever-popular and delightfully campy movie night! Every semester begins the same, we introduce ourselves and say what we do. Then we see what the members of our club are interested in. We learn the most about each other when we pick what song we want to translate and learn how to sign. Our members always get to choose – we ask them for song ideas, narrow them down based on level of difficulty, and put it to a vote. Then the fun begins. It usually takes 3 or 4 days to translate a song and then from there it takes about 4 meetings to teach everyone and be comfortable enough that we can perform the song, or record ourselves.

This past year we had the awesome experience of performing twice, once at Relay for Life and again at the Sexy Pitches final spring performance. Our debut at Relay for Life was bigger and better than we ever imagined. Everyone stopped what they were doing to watch when we took the stage. Afterwards we spent over a half hour with people asking about how they could join and be a part of something so awesome.

Here is the ASL Club performing “Let It Go” from the movie Frozen:

The ASL Club meets on Mondays at 8pm in the Commuter Lounge, SUB100S. Please join us, or get in touch- In celebration of Deaf Awareness Week, students are invited to attend a screening of the film Versa Effect on Monday, Sept. 22 from 6:30-8:30 in LC 100. The PG movie is presented in Sign Language and is closed captioned for the hearing!

From their childhood years to working at a Deaf school in Texas, Jackie and Seth have always loved to…HATE each other. To make matters worse, their bodies have been switched. What follows is a series of laugh-a-minute hijinks as Jackie and Seth struggle to get back to their own bodies before they are stuck forever. Versa Effect is filmed in the vein of Freaky Friday and is sure to be enjoyed by all.

The screening is free.  For more information, email commdis@newpaltz.edu.